Here’s our weekly Android app picks from the AFN staff for the week of April 27. These may be apps we can’t live without or apps we just discovered. Either way, we think they are worth sharing with you. If there is an app that you think we may enjoy, send us a tip so we can take a look.

Gerblins Free is quite the time killer from Butterscotch Shenanigans. Yes, I seem to review a lot of their games, but hey… they’re tons of fun! 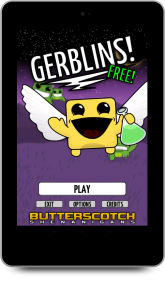 The Blergs are being infected by an unknown virus and you have to help cure them and release them from the midst of the other Blergs without uncovering a Gerblins thus bringing down more Blergs and making quite a mess. By tapping on a Blerg, they will show a number as to how many of its neighbors are infected. 0 means none are and that Blerg is set free. Come across a number though, now you have to be careful. Once you think you have pinned down a possible location of a Gerblins, hit the potion button and tap on the Blerg you think is infected. Get it right and the Gerblin disease is cured for that one. Get it wrong, more Gerblins are released and more are stacked onto your current pile. Addictive and annoying this game is, but for those who like strategy games, this may just fit the bill for you. Gerblins is free to play through 1 of 6 game levels. Buying the paid version unlocks all the levels.

Confide is a new app available for Android users that lets you send self-destructing messages like you’re Inspector Gadget. iOS users have had this app available for a few months now. Confide works a bit like Snapchat, but it is aimed more towards the business world. Messages can be sent to any phone number or e-mail address, and you’re even told when a message has been read. All messages you send through Confide are encrypted and will erase themselves after being viewed. The clever thing about this app is its screenshot prevention system. To read a message, users must slide their fingers along the message to reveal the words. The words in the message reveal themselves as you swipe along the sentence and disappear once your finger slides on to the next word. The orange and white color palette looks a bit on the ugly side to me, but the app works well enough that I don’t really care. On my Z1, trying to take a screenshot gets you an error about the storage device being in use. Of course there are ways around this for rooted users, but the app already has that covered with the swipe to read mechanic. Recording or photographing the device’s screen with another device is not out of the question, but that’s a bit extreme. I’m sure something simpler, such as an Xposed module or crack along those lines is going to pop up sooner or later, but right now, this is a solid app with an inventive developer behind it. I’m sure they will be monitoring hacks and updating Confide to compensate as needed. The one thing that detracts me from Confide is the fact that you have to sign up with your name, phone number, and e-mail address. You are also able to log in to Facebook to pull in contacts there as well. This makes the app feel a bit less secretive, but then again it isn’t designed to be SnapChat. It’s meant more for the professional world. I strongly recommend Confide for keeping your insults about Becky’s horrible hairdo a secret from her prying eyes!

If you are lucky enough to own a phone with an IR Blaster, this app is for you. Well, if it is a supported phone. Oh, and if you have an Apple TV. And you know, if you want to use said phone to control said Apple TV. Still with me? AIR Remote FREE for Apple TV lets you use your IR equipped phone to control your Apple TV. Simple. That is all it does, and it works well. Why spend hundreds on a universal remote or have a basket of remotes when you can use something that you already have on you, your smartphone? There is no set up required, just download the app, open, and point it at your Apple TV, and you are up and running. Currently the app only supports newer HTC and Samsung devices, but it worked on my M8 and S5 even though they are not officially supported. There is a free version with a few ads or an ad-free version for $3.99. Head to the link below and enjoy.