How can I make a phone call from my tablet using my cell number?

So, you just got an Android tablet and want to show people you can make phone calls from it eh?  In the past, I’ve held my Nexus 7 up to my ear (even though you don’t have to have it to your ear and probably shouldn’t be having a tablet held against your head for any length of time) and made phone calls from it just to get a reaction from my friends and family (it’s always gotta be about me).  Although, making phone calls from your tablet can be very useful and not just attention seeking. I’ve been on my couch with my phone in the other room, with my tablet in my lap (probably shouldn’t have your tablet on your crotch for lengths of time either) and had to make a quick phone call, so I’ve used my tablet at times to get the job done.  It is very handy to have the ability to make a quick phone call from your tablet.

This is where the Vonage Mobile app comes in to play. If you ever want to get in to a heated discussion with Android Geeks, head on over to an Android forum and tell them you’ve found the best Tablet calling app. It can get worse than a NY Yankees – Red Sox debate because there are a few tablet phone calling apps that users are loyal to. But, this is my article so I’m sticking with Vonage mobile as my top pick, for one simple reason….  You just need your cell phone number and not Google Voice or your own Google phone number (I know there’s work arounds and fixes but I find Vonage the most direct and simple). 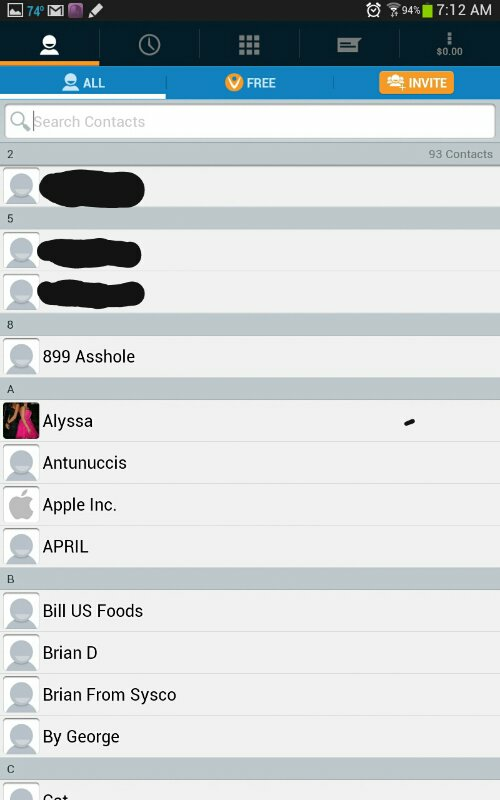 Screen shot from my Galaxy Note 8.0 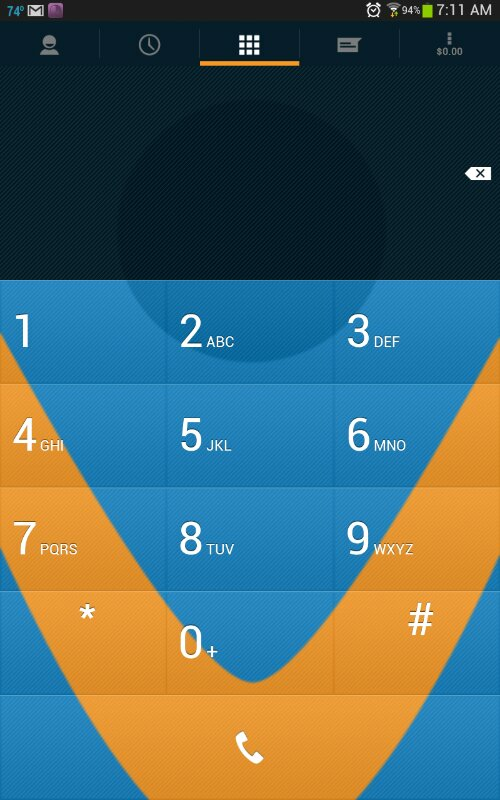 Screen shot from my Galaxy Note 8.0

The Vonage Mobile app syncs all of your contacts, phone call history, the ability to text and tokens (more on tokens later).  Don’t let the tokens part spook ya. The app is completely free and so are the phone calls and texts that you make.

I think I’ve used every tablet phone calling app available and as of now Vonage Mobile is hands down my favorite. Oh yeah!  You get 3000 minutes free a month here in the U.S. and have to pay a few bucks for more time with an in app purchase. Last month I used 34 minutes talk time according to my cell phone bill, so I’m good.

Here’s where I get lazy and let the developer explain the entire app to you.  Keep reading!

With Vonage Mobile®, you can place free high-quality calls, send texts and share photos with other Vonage Mobile users worldwide over Wi-Fi and 3G/4G.*INTRODUCING VIDEO CALLINGYou can now make FREE video calls over Wi-Fi and 3G/4G to other Vonage Mobile users worldwide. Vonage Mobile keeps your connected to your family and friends with great quality video calls.Video calling is supported on Android OS versions 4.1, 4.0, and 2.3.With Vonage Mobile you can make free calls to U.S., Canadian and Puerto Rican phone numbers for a limited time – up to 3,000 minutes per month!** Plus, make calls to mobile and landline numbers worldwide at ultra-low calling rates.On average, Vonage Mobile saves you 70% on calls to other countries when compared with other major mobile carriers, and costs 30% less than Skype™.***Remember to use Vonage Mobile over Wi-Fi when travelling internationally to stay in touch for less. And, if you need to add calling credit at any time, it’s easy. Just buy in the app, directly from your Google Play account.Find out what’s happening with Vonage Mobile: • Learn more at http://www.vonagemobile.com • Like us on Facebook at http://facebook.com/vonagemobile• Follow us on Twitter at http://twitter.com/vonagemobile • Need help? Visit http://vonagemobile.com/support*Data rates may apply**Limited-time free calling offer to the United States, Canada and Puerto Rico is for personal, noncommercial calling and excludes calls to certain geographic locations, including Northwest Territories, premium and special services numbers, satellite telephony services and other call forwarding services. Not to exceed 3,000 minutes per month.***Based on per-minute rates to the top 50 countries called. Comparison reflects published rates of leading mobile carriers in markets representing the majority of Android users.Pat: http://www.vonage.com/corporate/press_patents.php