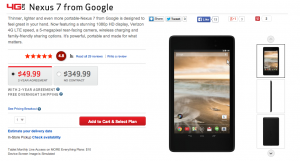 With the new line up of Nexus tablets right around the corner, Verizon has finally gotten their head out of their asses with the Nexus 7 2013 FHD LTE. I’m not a fan of inking a 2-year contract with any carrier for a tablet, but if you’re a Verizon customer and itching to get your hands on a LTE Nexus 7 FHD, they’re offering that very tablet when you sign a 2 year contract for $49. Before you ink that 2-year deal for last year’s Nexus 7, you may want to wait a few more months to see what’s doing with the new Nexus tablets that may be announced late Spring/Summer.

I’ve recently upgraded my WiFi Nexus 7 FHD to the LTE model and couldn’t be happier, but again, with the new Nexus tablets just around the corner, I don’t suggest inking a 2 year contract, even if it’s still a killer tablet. Hold on to your horses and see what Google has up their sleeves for 2014 – hopefully even a LTE Nexus 8…