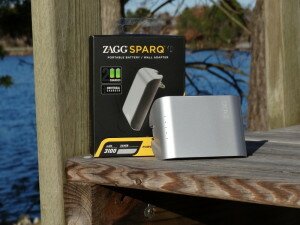 ZAGG has been making screen protectors for most phones since before the original HTC EVO. They have since expanded into other areas of smartphone and tablet accessories, including external batteries. For the past week, I have been using the ZAGGsparq 3100, one of three sizes they offer for external batteries. ZAGG has perfected the screen protector, now let’s see if they have another hit on their hands.

The first thing you notice after opening the box is the build quality. The ZAGGsparq 3100 is very sturdy and feels solid enough to toss around. The unit is plastic, the front a glossy light gray and the back a matte black. I was rough with it (on purpose) and do not see any scratches after a week’s worth of being tossed in a bag or my truck.  One of the best features of the ZAGGsparq is that you do not need to carry around an extra charging cable for the unit itself; it has foldable prongs built into the back. The prongs lock into place when being stowed into the back or when being used with no needless extra movement. ZAGG kept the design simple. Besides the built-in plug, there is just an on/off switch, five LED’s to see how much juice is left, and a button to press to activate those lights. The bottom of the back has an ON/OFF switch. Remember to turn this off when not in use. The AC plug folds out to charge

I used the ZAGGsparq on three different devices: 2013 Nexus 7, Nexus 5, and an iPhone 5S. The ZAGGsparq 3100 is rated at 3100mAh and the USB port charges at 2.1A for compatible devices. The Nexus 7 charge time varied. It would charge 10% in anywhere from 12 to 20 minutes, both being good times considering the Nexus 7 has a 3950mAh battery. The Nexus 5 charged 10% in about 13 minutes and the iPhone 5S would charge 10% in 9-10 minutes. All three tests were done with the Wi-Fi on and the screens off; I wanted to simulate a real use scenario, not lab conditions. During charging, the battery pack did not heat up anymore than your cell phone does when charging.

There are two aspects of the ZAGGsparq 3100 that I did not love. The first concern was size. The battery pack is not bulky, it feels very nice in your hand, but it does not easily fit into a pocket. ZAGG does offer a smaller capacity battery, the iFrogz GoLite, if size is a huge concern, but that capacity is less at 2600mAH and requires it’s own plug and cord for charging. This is not a deal breaker, but just know going in that this is not something you are easily going to slide into your pocket, this is something you will keep in your laptop bag. If you are going to store it in a laptop bag anyway, I would step up to the ZAGGsparq 6000 to get even more charging power.

The other concern was price. The ZAGGsparq 3100 retails for $69.99 on ZAGG’s website and at several retail stores although you can find deals on them like ZAGG’s recent 50% off promotion. Just going off retail price, there is a little bit of sticker shock when you can find similar capacity batteries online for significantly less. But you need to decide if you are going to risk purchasing a cheaper unit from an overseas company you have never heard of before. It will take a few days to a few weeks to arrive, and if any issues arise, good luck contacting them. Also, remember you are plugging your very expensive phone or tablet into this battery, theoretically the phone will limit the charging voltage but I do not like taking chances with a device that costs several hundred dollars. Overall, I am pleased with the ZAGGsparq 3100. The product is very well-built and performs exactly as described. Not having to carry an extra cord and plug to charge the ZAGGsparq itself is one less thing to remember and one less cord to have to cram in your bag. The ZAGGsparq has enough capacity to charge your phone fully and enough left over to make a dent in your tablet also. The price is higher than some off brand names, but there is also the convenience of being able to drive to a store, hold it in your hand, make an informed decision, and walk away with it right now. ZAGG has a great website, is active on social media, and has support available via email or phone. If you do decide to spend the money on ZAGG, you will not be disappointed in this product.