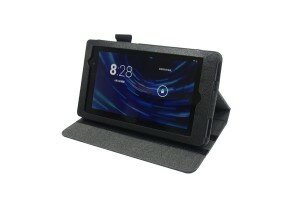 Bear Motion’s Genuine Cowhide Leather Case is a nice durable smart cover case for the Nexus 7 FHD (2013 model). It holds the Nexus 7 FHD snug with a velcro flap and offers good protection. The cover itself folds back for use as a two position stand and is held shut by magnets in the top and bottom right corners. There is a stylus loop next to the power and volume rockers on the top right edge of the case that can get in the way of the buttons if you do have a stylus in there. However, since this case is a smart cover, having the buttons tucked away is not really an issue as turning the Nexus 7 FHD on and off is automatic with opening and closing the cover.

Wireless chargers are compatible with the Bear Motion Genuine Cowhide Leather Case when closed and there is a cutout for the Nexus 7 FHD’s rear camera on the back so the camera may be used while in the case.

The Bear Motion Genuine Cowhide Leather Case for the Nexus 7 FHD (2013) is available from Pro eBiz at Amazon.com in black, green or purple.