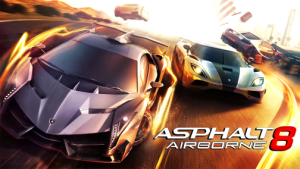 For anyone who watches or loves Top Gear(U.K.), this game features many, upon many of the cars you have seen on the show.  From Zonda’s to Mercedes SLS AMG, Dodge Dart to Audi R8, not to mention Cadillac, Mini, Toyota, Lambroghini, and so on.

Asphalt 8 is a rather nice racing game, with loads of vehicles to choose from.  You start off in a rather “Dodgy” Dodge Dart and can build up credits for upgrades to your current car, or flat out buy a new car.  As soon as I could, I hopped out of the Dart and into an Audi R8 and have been racing and tuning with that one.

Now I ‘ve been playing this game on my original Note (sgh-i717), and I must say, it plays rather well, for an older generation phone.  The display settings do have a HIGH settings for graphics, but for some reason, I am only able to select MEDIUM rendering on my phone.  Maybe it knows what I’m using it on and says ” uh-uh… not gonna let you mess this up.”  Playing this game on the Xperia Z I tested.. that’s a different story.  Game was very fluid and quick, I was able to select highest rendering possible and plays great.

But back to the game itself, there are many a modes such as World Series multiplayer race, career and many races within this mode itself,  season 1-8 depending on status level.

The level of cars you have to choose from depends on what racing “segment” you’re in.  You start off in D class where you have cars like the Dart, R8, Tesla model S, Cadillac ATS and XTS, but as you progress farther and build up credits and skill, you can gain access to the C, B, A, and S class cars  which would be your Mercedes SLS AMG, Camaro GS, Alfa Romero 8c, Lambroghini Veneno, Aston Martin DB9 and so on.  Mind you, the higher level of cars do mean a higher level of control so don’t think you can just buy a crap ton of credits and blow it on the cars.  It will take some skill and learning to get used to those cars.

The controls are for you to decide.  It starts off as auto acceleration with you only having to tilt screen for steering and tap for brake or nitros, however.. you can select to tilt for acceleration and steering, or you can have on screen buttons for your controls- its up to you.

Like many racing games there are crashes and drifts, but this you can also choose to either go for style points and nitro launch yourself off a ramp into a barrel roll, or stick to the ground and race in a more traditional manner.

This game is now free in the Play store and as is with everything, there are also plenty of temptations within the game to spend even more money, BUT…. that shouldn’t steer you away.  Yes you can choose to spend real cash and buy your upgrades, or you can race and just enjoy the game and earn your “credits” to enthrall yourself with whatever car you desire.  The point is it’s a good game for killing time or if you just wanna immerse for a while during study hall or on a lunch hour.

All in all, It’s a decent racing game for the price right now.  In game purchases always are a bummer and may push you away, but if that’s the case… just play the game and earn your points or money thru the game itself.