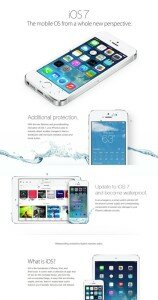 A fake add claiming that iOS 7 makes the iPhone waterproof has fooled a few iPhone owners resulting in water damaged iPhones. The add says that “In an emergency, a smart-switch will shut off the phone’s power supply and corresponding components to prevent any damage to your iPhone’s delicate circuitry.” It also says that the update to iOS 7 allows the iPhone “to instantly detect sudden changes in thermodistribution.” and that “Waterproofing covered by Apples’s warranty policy”. LOL. Yes, that was my first reaction but apparently a few iPhone owners didn’t understand the lulz and maybe tried it. What did they get, maybe a dead iPhone.

Rumor has it that the fake add originated at 4chan boards and a lot of peeps have been tweeting about  it.

Come on Apple users I guess now that you have a water damaged iPhone Tim Cook will bring in this as a feature is iOS 8. Let’s hope Apple replaces your bricked iPhone under warranty (if you have it) because the water indicator inside the iPhone would have definitely changed.