As I sit here looking at the next iteration of the Google’s Nexus 7 sitting on my desk next to my “old” Nexus 7 and am trying to think of a few words that summarize just how different yet the same this device is. My trusty old Nexus 7, which I suppose is now called a Nexus 7 (2012) at this point, is a great device and if the new version had not come along then I would have blissfully kept using it and not had a second thought. The words I am looking for are just better.

The most immediate difference comparing these two Nexus slates is the display chosen to use for 2013. Both share a similarly sized 7″ IPS LCD display (less than a mm difference from 178.3mm verses last year’s 177.8mm) so the real difference is what is gained from packing in higher resolution and PPI into the same real estate. The Nexus 7 (2012) uses a 1280 x 800 720p HD IPS display at 216 PPI. For 2013, Asus increases the resolution to a 1920 x 1200 Full HD (FHD) 1080p IPS display at 323 PPI. I could not distinguish individual pixels at this resolution. 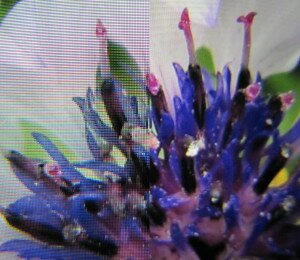 Text is smooth and sharp and the additional resolution and PPI count makes for a breathtaking difference with media as well. The opening sequence of Transformers: Dark of the Moon has several very small explosions in the distance as camera pans across Cybertron. These are barely noticeable as yellow “blobs” in the background at the Nexus 7 (2012) 720p resolution while at 1080p on the 2013 Nexus 7, you can clearly see the flames as they flicker post explosion.

Viewing angles are good on both with the slight edge going to the 2013. Outside viewing performance was similar from 2012 to the 2013 Nexus 7 and visible in all but direct sunlight. Color reproduction is accurate on the Nexus 7 (2013) and comparable to other high-resolution IPS panels such as that found on the HTC One or Chromebook Pixel.

My thought is the Nexus 7 (2013) has raised, if not set, the bar on how great a display can be and this is a good thing.

Sound quality on the Nexus 7 (2013) is clear and loud, not at all tinny or under powered as it was for the 2012. I found the stereo sound made for a better experience but is slightly muted if held wrong – a common issue with rear facing speakers. 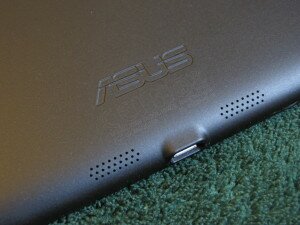 If the speakers were shifted even to the edges instead of rear, the stereo surround experience would be great instead of just good.

The HTC One and Nexus 10 front facing stereo speakers have set the standard so what Google has done with the Fraunhofer powered stereo speakers with their back facing placement falls short in comparison. If only the Nexus 7 (2013) speakers had been angled directly to the sides or even slightly towards the front, this could have been great instead of just good.

The Nexus 7 (2013) also has stereo sound demo hidden away in settings for Google Play Movies. You can hit this link for the Google Nexus YouTube channel if you want to watch it on other devices and make your own comparison.

Overall, the addition of stereo sound and clearer sound quality is an appreciated improvement from 2012 but not game changing.

The height has been bumped up from 198.5mm to 200mm which is only noticeable when holding side by side. The overall width was shaved just a hair, 120mm to 114mm, really not much at all. That missing 6mm turns out to make a pretty big difference in holding the Nexus 7 2013 in your hands and is also just enough that it slides into the back pocket of my jeans – something I only could do with my baggy cargo pants previously. This minor change allows for me to carry the Nexus 7 (2013) out and about more often and in situations the Nexus 7 (2012) would be left behind for lack of a convenient carry. 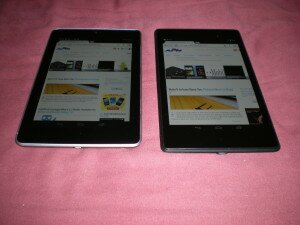 The thickness (or thinness?) going from 10.45mm in 2012 down to 8.65mm of the 2013 Nexus 7 and lighter weight (340 grams down to 240 grams) is noticeable between the two. While the narrower width is appreciated, it is the new weight and thinness that caused a familiar “wow” moment similar to the one I had holding the Nexus 7 (2012) the first time coming from the original Samsung Galaxy Tab 7. Quite the difference a year makes in mobile tech.

I will not get into the bezel too much, our own David Quillinan wrote up an excellent comparison here.  The side bezels are thinner, the ends are wider by just enough that your thumbs do not intrude into the tough sensitive area of the display like they do on the 2012.

The Nexus 7 (2013) performed very well with its 1.5GHz Quad-core Qualcomm Snapdragon™ S4 Pro. Side by side with the 2012 Nexus 7’s NVIDIA® Tegra® 3 quad-core processor at 1.3GHz, applications loaded from the application drawer came up 1-2 seconds faster and switching between applications in the background was less than a second faster. Page loads using the Chrome Browser gave edge to the Nexus 7 (2013) by 4-5 seconds on all but the lightest web pages.

Playing Rayman Jungle Run or Riptide GP2 over the network actually used just two of the four cores in the 1.5GHz Quad-core Qualcomm Snapdragon™ S4 Pro although they ran at 80-90%.  On the NVIDIA® Tegra® 3 based Nexus 7 (2012) 3-4 of the cores were active but with utilization in the 30-40% range. 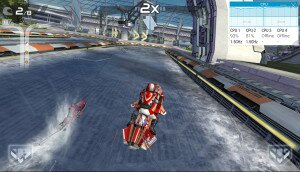 Streaming video (Google Play Movies, Netflix and YouTube were used to test) over the network was smooth in most cases with both tablets ramping down to using just a single core at times once the video stream began.

The Nexus 7 (2013) 5MP rear camera is good but leaves much to be desired. Nick nailed it in his full video review of the Nexus 7 (2013) as it is very reminiscent in quality of the Galaxy Nexus. My major gripe, however, is that lack of a flash combined with poor low-light performance is crippling in pretty much every indoor environment. Once in full light, it provides good results for what it is – a 5MP sensor on the back of a tablet. The 1.2MP front facing camera on both the 2012 and 2013 models take the same washed out, grainy video that you should expect from a sensor that small. 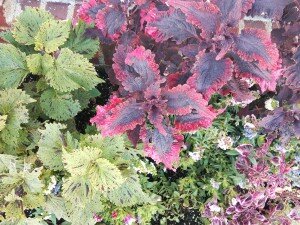 It is worth noting the Nexus 7 (2012) has the camera shortcut missing from the application drawer and the front facing camera is accessible only via apps that call the camera function or a third-party camera launcher. On the Nexus 7 (2013) however, the new 4.3 camera app is present and includes all the features of 4.3 including new layout.

Button placement is the same on both tablets with the volume rocker under a power button on the right top edge. The front facing camera is a 1.2MP on both but has been relocated from the center of the bezel as found on the Nexus 7 (2012) to the right edge for the Nexus 7 (2013) which also now includes a 5MP rear facing camera on the back top right corner.

Battery capacity has been reduced from 4,325 mAH to 3,950 mAH but use time improves from 8 to 9 hours and Qi compliant wireless charging is now included. 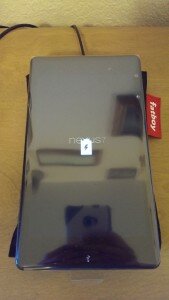 Qi Wireless Charging is included on the Nexus 7 (2013)

Also new on the Nexus 7 (2013) is the addition of a second rear facing speaker previously mentioned along the back top edge and a notification light in the center of the bottom bezel.

What Google and Asus did right last year with last year’s Nexus 7 is still present this year. The key difference is the minor changes taken together makes the Nexus 7 (2013) a better tablet all around. The 7″ tablet is really a great form factor on the go compared to larger format tablets and the price point at $229 for the 16GB and $269 for the 32GB is quite competitive. For those that need mobile broadband, the release of the Nexus 7 FHD LTE in the next few days will take care of you. The display is great, audio is clear and the stereo surround is a nice touch. Qi Wireless charging compatibility is the killer feature for me. (The HTC ThunderBolt, Droid DNA and LG Nexus 4 have opened my eyes to how useful this is.) The rear facing 5MP camera is not going to see much use but I am glad it is there in case I need one.

If you recently purchased a Nexus 7 (2012) does the new Nexus have what it takes to make you switch? For an Android gamer then yes. The display and faster Snapdragon™ S4 Pro are compelling on their own with stereo surround sound a nice bonus. Our Android Fans that mostly do web browsing or e-mail and casual gaming will find the Nexus 7 (2012) will faithfully serve you for a while longer.