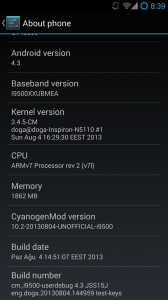 For installation instructions and download links head over to the original thread at xda.