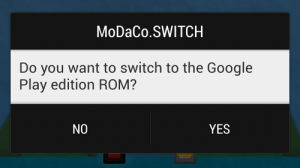 Remember MoDaco Switch for HTC One which went in public a few days ago, along with the public beta for HTC One Paul O Brien also created an indiegogo campaign to fund for Galaxy S4. Well, the goal for the campaign was to buy test devices and that goal of £1,000 has been reached, infact it’s just a little over it.

So, let’s hope Samsung Galaxy S4 owners get MoDaco Switch in August sometime as mentioned on the indiegogo page.