Holding the New Nexus 7 in portrait and landscape

Bezels in portrait can be a little thin at times

So you got the New Nexus 7 or have one coming any day now?  Let me fill you in on my thoughts of the new shape factor with the 2013 Nexus 7.

Google claims the 2013 Nexus 7 has the best display of any tablet available.  That’s hard to argue with, with a 7.02 inch, 1920×1200, 1080p HD IPS display at 323 ppi.  Watching movies, reading text and playing games is an absolute dream on the New Nexus 7.  The viewing angles are mind blowing, the colors aren’t over saturated and the blacks are impressive, even if not AMOLED-like.  For any hard core Android geek or anyone looking to get their feet wet in the tablet world, the New Nexus 7 is with out a doubt the best bang for your buck at $229 for the 16g model.

Last year when I got my 2012 Nexus 7 I was in Android geek heaven.  Out of the box it was running Android version 4.1, it was a 7 inch Nexus device, it was blazing fast (we all know how the blazing fast story turns out, hopefully 4.3 TRIM support will help this over time) and it was the 7 inch tablet I’d been always waiting for.  Except for the bezels.  After holding and playing with an iPad mini, I was wishing the 2012 Nexus 7 had thinner bezels all around.  Be-careful what you wish for.

Fast forward a year to me getting my paws on the 2013 Nexus 7.  The very first thing I noticed upon firing it up was the absolutely mind blowing display, thinner bezels side to side and still gigantic bezels top and bottom.  The 16:10 aspect ratio made the 2013 Nexus 7 look like the 2012 Nexus 7 had gone through a growth spurt but shedded a few pounds on the sides. This is where I have problems holding the tablet at times.  If you notice in the above video, occasionally holding it in portrait mode by the bezel, your thumb can accidentally interact with the screen.  For example, from time to time holding the Nexus 7 in portrait your thumb can long press a home screen and pull up the wallpaper changer or browsing the web, that same pesky thumb can trigger a tab or link that may be on the very sides of the site.  This by no means takes anything away from the New Nexus 7, but merely an observation.  It could be that I’ve been using the Samsung Galaxy Note 8.0 and the 2012 Nexus 7 for the past few months and am used to having the big bezels all around. 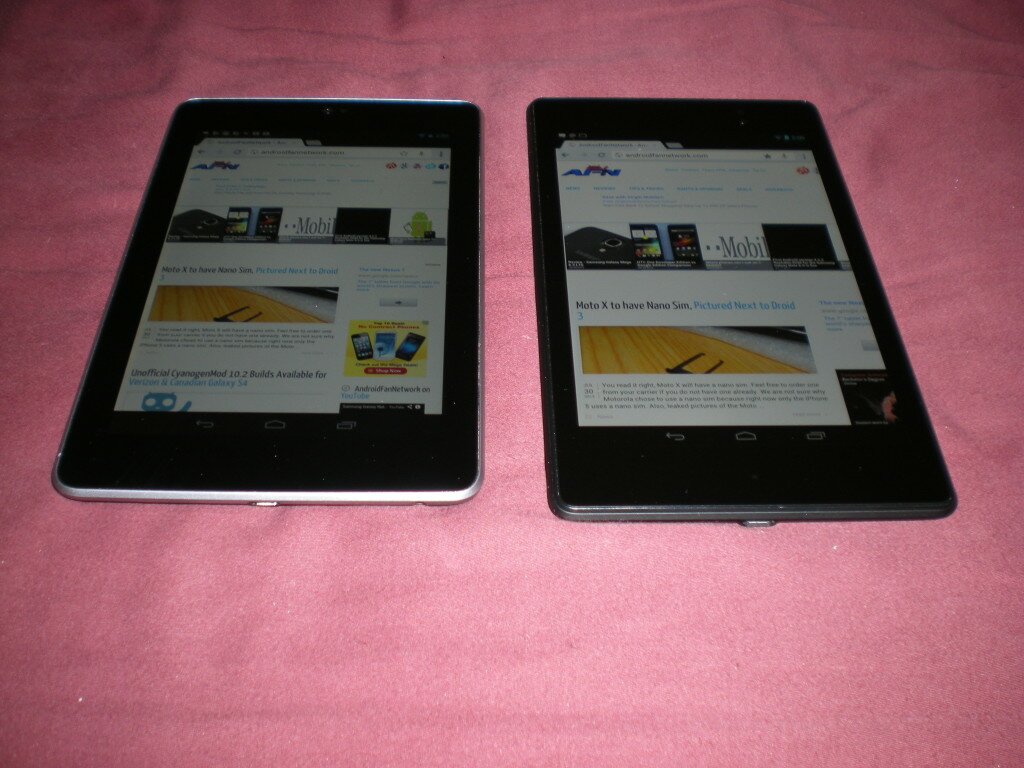 Don’t let this observation deter you from getting the New Nexus 7.  If you have bigger hands like myself, you may have to palm the tablet or switch to landscape when doing certain tasks.  If you have smaller hands the side bezels shouldn’t be an issue at all.  I for one am absolutely thrilled with the New Nexus 7 and will just have to learn to hold it differently at times.

Hope on over to Cell Trader Online to buy the Nexus 7 or devices just like it.