As a person that uses my primary phone for corporate email I unfortunately cannot root my phone or use custom ROMs. Generally I am regulated to accepting carrier ROMs that are full of bloatware and slow to update. Thankfully the folks on XDA have been able to convert a carrier HTC One to a Developers or Google Edition. I was able to try both versions on a pair of black ATT Ones and thought it would be helpful to share the differences.
Process

The process to install either ROM while maintaining stock recovery and without root is very similar. There are several great step by step instructional threads on XDA so I will not be providing instructions. You would need to do the following:

1.S-off (I used revone)
2.Change CID to appropriate (completed in fastboot)
3.Install Developer RUU (exe) or Google RUU (zip)
4.Change MID if necessary (I did not have to do this on the ATT versions)

Developer Edition
The Developer Edition ROM is currently JB 4.1.2 with Sense 5. It has all the great benefits from HTC such as Blinkfeed, Zoe, IR and the nice camera app. After installing the RUU I was able to receive and install a small OTA update. Hopefully 4.2.2 will be coming soon.

Google Edition
The Google Edition ROM is currently JB 4.2.2. Of course it’s pure Android goodness without Sense. You do lose Blinkfeed, Zoe, IR and have the stock Android camera interface. I do prefer the lock screen from the pure Android. I have not received any OTA updates for the Google Edition.

Quick Comparison
Both ROMs are great compared to the ATT version. Very streamlined and clean. GE is sexy and extremely fluid/smooth. It does seem a bit quicker without the Sense overhead. Also the 4.2.2 notification bar is vastly superior to what’s currently available on the DE with 4.1.2. It runs well on the HTC One hardware. On GE you also have the fixed Google Search widget at the top of each screen and the unique icons/widgets from the N4.
DE also runs very well on the HTC One hardware. I think we have reached a point where the speed and stability stock ROMs are very comparable to custom ROMs. Sense 5 does add the benefit of Blinkfeed for social media and news updates. The IR blaster app, Zoe and FM radio are also nice benefits to maintain with your DE One. The camera app seems to be easier to snap pictures as well however I believe that can be added to the GE version via apk.

Conclusion
I personally prefer the DE version at this time mainly because of Zoe and the IR blaster. There are some great things in the GE edition such as the clean interface, Google Search widget and easier, cool lock screen to navigate settings menu. Bottom line is we have two great choices for installing a non-carrier branded ROM which removes bloatware, maintains OTA and adds native tethering. You can’t go wrong with either.

Just one man’s opinion, would love to hear yours. 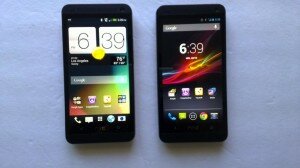 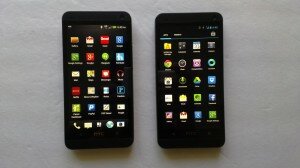 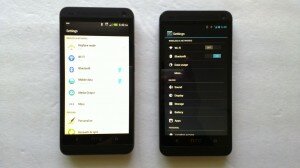 mlee1999 is an avid mobile electronics junky. Starting with the original G1 he has been a huge fan of Android from the beginning. He collects mobile electronics and can't pass up a good deal. Day job is as a banker (go figure) and a huge basketball fan. Great family with kids growing up in a connected world.