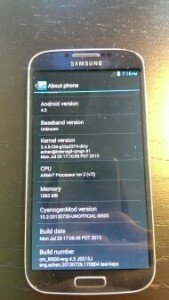 Samsung Galaxy S4 i9500 users have been waiting for this for a long time, it looks like their dreams will be fulfilled soon. CyanogenMod 10.2 just booted up on the i9500. We had done a small writeup on as to why the i9500 is not getting AOSP love but trust me we are as excited as you are with this news.