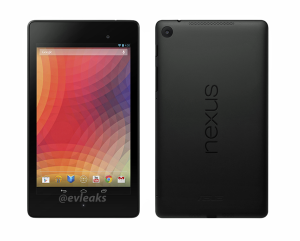 Another interesting thing to note is the time on the front image, it’s 4:30 peeps, yeps the new Nexus 7 should run Android 4.3 out of the box. Why do we say that, well Google is known for keeping the time on  newly released devices with the Android version they are running. Don’t believe us check out pictures of the Nexus 4 on the play store, except for one picture all of them show the time as 4:20. Makes sense, doesn’t it.