Ever wonder what’s doing when you’re not at home or work?  Motion Detector Pro is a free app in the Play Store that will keep you well informed of what’s going on while you’re gone.

Motion Detector Pro does just what it’s supposed to do. It uses the front or rear facing camera to capture shots that trigger the motion sensor in this crafty little app. Once the app is triggered by any kind of motion, it instantly takes a snap shot of the object in motion outlined in a red border.  As you can see from the picture above, the app snapped a pic of me as I was exiting work the other night (still handsome even after a 12 hour day in a 110 degree kitchen).

I own a restaurant and use this app on a few phones that I place throughout the restaurant when I leave at night. This is by no means a security system and if you’re really looking to catch the bad guy then invest in a real security system.  If you’re looking for a little peace of mind while you’re away and want to know when there is any kind of movement in your establishment or home, then Motion Detector Pro will work just fine.  I’ve actually almost called the police on my business partner that has triggered the app getting a late night snack, but the pic in the email showed me it was him so all was good. We also have a security system in place, but like I said, its just peace of mind knowing I’ll get in an instant shot of any kind of movement when I’m not around.

The only downside to this app is you have to use your phone. Luckily for me I have stacks of Android phones laying around (pic above taken with an HTC Evo LTE, which has a decent camera), so I have the luxury to place a couple phones around. Luckily there are sites like CTO and Swappa to pick up Android devices at decent prices.  Check the description below for more details and settings from the Dev himself.

This app enables you to use your android device as a remote surveillance camera or spy cam with motion detection functionality.
Motion Detector Pro is a camera surveillance app, that uses the built-in camera to detect movements in the surrounding area using an advanced motion detection algorithm. If it detects movement it sends an email or a text message with a picture link to another cell phone, allowing you to remotely monitor an area using your Android phone. Motion Detector Pro can:
✓ Take a picture when the camera sees a movement and send it to an email or another phone. Great for catching thieves, watching your business/home or keeping an eye on your pet
✓ Start surveillance remotely by using text messsages (with password protection)
✓ Indicate realtime on the phones display where the movement is detected
✓ Stealth mode which closes the app as soon as the phone is touched
✓ Store the surveillance images on the cloud or locally on the phones SD-card 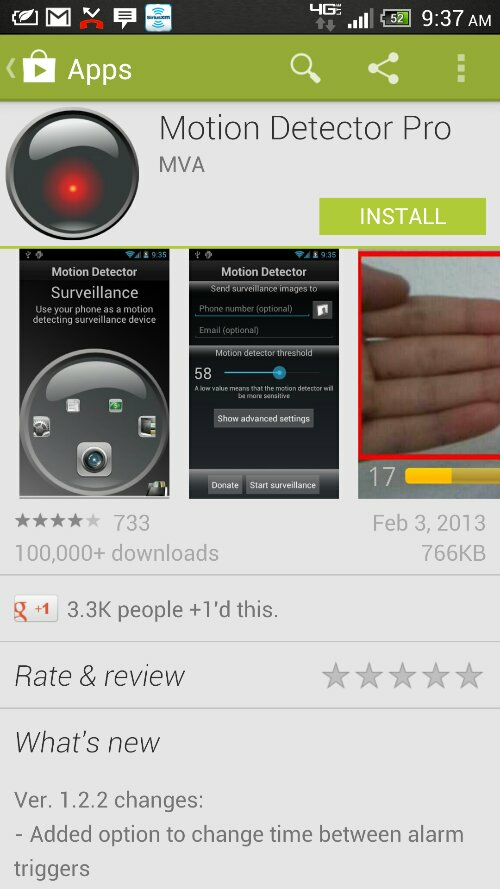 There’s also a paid version to support the dev