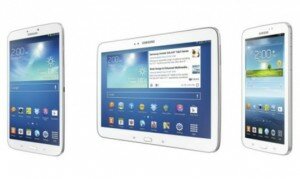 Today Samsung announced Galaxy 3 series of tablets will be available in the US on July 7.

Wi-Fi only versions of all the 3 models are available for pre-order starting tomorrow  ( June 25 )  in white and golden brown colors. There is no word on availability of variants supporting mobile data in the US yet.