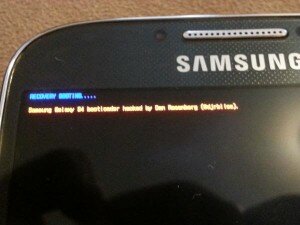 It’s been a long wait for AT&T users but finally djrbliss has finally released the exploit which will hack the bootloader on the AT&T and Verizon versions of Samsung Galaxy S4. This might be your only chance to hack the bootloaders as Verizon is know for blocking it via software updates and it looks like AT&T is also taking the same route so go for it peeps. Let’s quote djrbliss for a second :-

I just released Loki, a set of tools for developers and users to flash custom kernels and recoveries on the AT&T and Verizon branded Samsung Galaxy S4.

The tool is available at:
https://github.com/djrbliss/loki

The technical details on how the exploit works are described at:
http://blog.azimuthsecurity.com/2013…cure-boot.html

Does this make any permanent changes to the device?

No permanent changes are made to your device when using loki_flash. The bootloader itself is untouched. By restoring the original system, boot, and recovery images (via Odin or otherwise), the device will be in a stock state.

Can this be patched?

Absolutely. Any update that includes a new aboot will almost definitely cause your custom kernel or recovery to fail to boot without running it through loki_patch again, and if the update contains a fix for the vulnerability Loki exploits, it may permanently prevent using the tool. It’s possible for Samsung to ship an update that prevents downgrading aboot to a vulnerable version, so I recommend avoiding installing any OTA updates without confirmation that it’s safe.

This all seems complicated. What about a step-by-step guide?

These tools are primarily intended for developers, who will be able to use them and provide ordinary users with easy ways to flash custom ROMs. Be patient, I’m sure your favorite ROM developer will come up with something for you.

Any ROMs that include a replacement boot.img must be modified to include a Loki-patched boot.lok file instead. Otherwise, your phone will fail to boot until you restore a Samsung-signed boot.img or a custom boot.lok image via your custom recovery, or flash a stock image via Odin.

This is similar to kexec in that it works around a locked bootloader, but this approach is much more flexible and robust. Kernel and recovery developers can build their projects just as they would for an unlocked device, run the final result through Loki, and then it’s ready to be flashed. No hackery and brokenness required.

And now we wait for our favorite ROM & Kernel developers to use this and bring custom ROMS & kernels to the AT&T & Verizon Galaxy S4.

Please note neither we nor djrbliss is responsible for any bricked devices, you are doing this at your own risk.